A couple of weeks ago my article ‘Subnational transnational networking and the continuing process of local-level Europeanization’ was formally published in the latest issue of European Urban and Regional Studies (an open access version can be found here).

To see how much this activity developed since the 1990s I looked at the European networking activities of local authorities in South East England and Northern France. These regions were chosen because they were the focus of a lot of attention in the 1990s, and this research (such as this) provided a nice baseline to assess more contemporary networking activities. 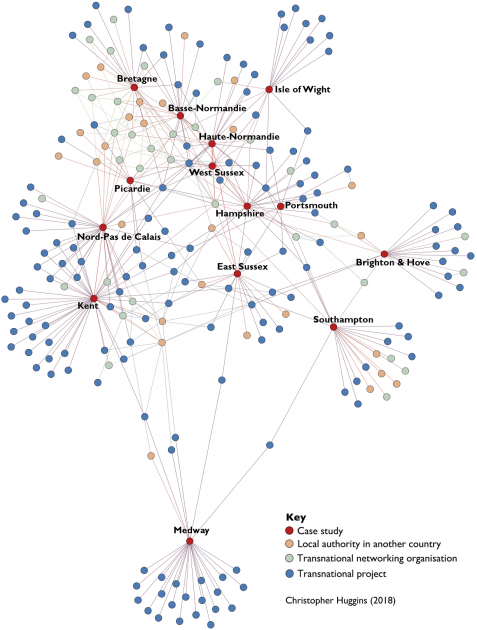 The nature of this co-operation has also changed. While much activity in the 1990s was about developing bilateral partnerships, the focus now has shifted to multilateral networking, where local authorities participate in EU level networking organisations, such as Eurocities, the Conference of Peripheral Maritime Regions and the Assembly of European Regions, reflecting changes in how the EU policy process has evolved and become increasingly receptive to interest representation. The number of transnational projects has also increased, as eligibility for EU-funded programmes such as Interreg have expended.

So, local authority engagement in transnational networking has increased. But not all councils follow the same pattern. Some (like Kent and Nord-Pas de Calais) were quite heavily involved. Others (like Portsmouth and Picardie) only had limited engagement. Brittany and Hampshire seemed to prefer taking part in multilateral networks over bilateral partnerships, while East Sussex preferred striking direct partnerships through bilateral networks. Medway, Kent and Nord-Pas de Calais were involved in a large number of transnational projects, partly reflecting their geographical locations and eligibility for various funding programmes.

So the overall picture is one where local authorities have become increasingly linked with their counterparts in other European countries and become more ‘Europeanised’. But it’s important to remember transnational networking remains a voluntary activity. It only takes place where opportunities to take part are present and often depends on a range of local level factors. This speaks to wider research on Europeanisation at the national level, which also finds a range of national factors mediate the overall impact of Europe.

Given the context of Brexit, this obviously has implications for local government in the UK. Will councils continue to co-operate with their European counterparts once the UK leaves the EU? On the one hand, Brexit by definition will lead to a reduction in opportunities for local authorities to engage at the EU level. However, the UK government has also suggested it wants to continue participating in programmes such as Interreg which has facilitated much of this co-operation. And EU membership isn’t a prerequisite for participating in transnational networking. Many Swiss and Norwegian localities have a presence at the European level, and many transnational networks (such as the C40 cities and nrg4SD) operate on a global scale. The future of UK local authorities networking with their counterparts in Europe will ultimately depend on the opportunities available to them. Until the outcomes of Brexit become clearer, much of this won’t be known.